On the development, nature and adaptability of the sailing and steam drifters, the Fifie; its unsurprising origins on the Fife coast

Double ended with upright stems (coming to a pointed, perpendicular front and back), the fifie is named after its origins on the Firth of Forth, particularly in Fife. Mostly two masted and rigged with lug sails, it was designed around the needs of beach launches and shallow harbours around the South East coast of Scotland. It had a reputation for what sailors call ‘weatherliness’.

The stable design was adaptable. Generally speaking around 36ft long by the mid C19th, by the 1880s they were being built at up to 60ft. At the beginning of the C20th, they could be 70ft long. The 1870s saw experimentation with half-decked and fully-decked versions.

Scottish fishermen always shot an even number of nets from them, English an odd number.

The fifie adapted well to the introduction of steam and was a major feature of the herring fishing on the east and west coasts of Scotland and England, as well as in the Irish Sea, through until the 1930s.

The Chatham Directory of Inshore Craft (1997) says, From the mid-1880s onwards the fifie became a supreme herring catching and sailing machine, capable of taking dozens of tons of fish in its 2000 yards of (seventy-eight) drift nets in a night and, in favourable conditions, delivering them fresh to market at speeds approaching 10 knots. 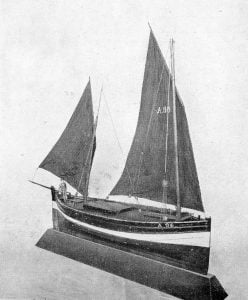 Model of a fifie from Aberdeen (British Fishing-Boats and Coastal Craft, 1950)