A compromise between the Fifie and the Scaffie, a boat with a popular design which didn’t adapt well to the introduction of steam

William ‘Dad’ Campbell of Lossiemouth liked a fifie with its straight stems, his wife liked the raked stems of a scaffie. So the story goes. Either way, Campbell built a boat with a straight-stemmed bow and a rake-stemmed stern. It was 1879. Britain was at war with the Zulu nation. The boat was called a zulu.

It was slightly cheaper to build and gave a bit more deck space at the stern. The raked stern protected the rudder in what were often crowded harbours. By 1900 there were 480 zulus registered at Buckie.

Initially clench or clinker built, a shift to carvel build (flat rather than overlapping planks on the sides) and the introduction of steam capstans allowed an increase in size from 40ft to 60ft (up to 80ft overall).

Two masted with massive lug sails, it was very fast and hugely successful in its day, but the hull design didn’t work well with the introduction of steam power and it disappeared rapidly in the early C20th. 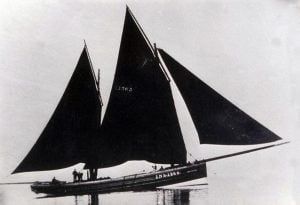