The word lugger, as a kind of sailing herring drifter, refers to the lug rig of its sails rather than the nature of its hull, although in Lowestoft the term was still used after drifters shifted to a dandy rig in the late C19th.

Luggers replaced the herring busses, which had evolved around the Dutch need for a factory vessel, processing the fish on the British coast. Encouraging the move of English and Scottish fleets towards the capacity these larger vessels offered was slow and painful, but once this was achieved, the fishermen adapted the heavily-promoted buss design.

Closer than the Dutch to their home ports the different relationship to the market – and the development of scaled-up onshore curing operations – gave an advantage to speed. The Dutch had used small ventjagers to race early season premium herrings from the busses to the market.

Originally a herring lugger was three-masted. Lug sails are irregularly trapezoid in shape, hanging from a spar slung across the side of the mast, pointing upwards towards the back, giving the sail a shorter leading edge. 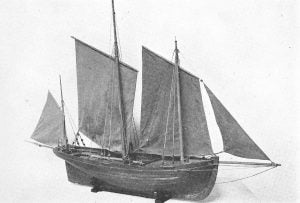 By the 1750’s it was a moot point whether many a fisherman on the South Coast was a smuggler in off moments, or a smuggler who went fishing in his spare time, and I think it is quite likely that the need for speed for this nefarious occupation influenced the change-over from the clumsy square-rigged buss to the fine-lined three masted lugger. The sails of the old bluff-bowed craft were tall and narrow, with the rigging not widely spaced at the masthead. Hence the yards, which in square rig are always outside the rigging and before the mast, could be braced up quite sharp. On a wind with the tacks well bowsed down and the yards peaked up, these square sails somewhat resembled lugs. It did not require much alteration of gear to convert from square to lug rig. All that was necessary was to bring the yards inside between the rigging and sling them in a fore and aft position at a distance of about one-third from the fore end instead of in the middle, as experience soon showed that the sail set better with the halyard nearer the throat. This resulted in a quadrilateral sail, with the luff shorter than the leech.

March’s book is a thing of extraordinary beauty, but he didn’t write for the landlubber.

The origins and later innovation in the lugger seems to have come from the French, reinforcing March’s sense of design led more by the need to outrun the revenue men in the Channel than getting the herring into Yarmouth. It saw finer and finer lines and, eventually, a prohibition on building the fastest ones.

Smuggling was in decline by the 1840s and, perhaps coincidentally, the fishermen began to dispense with the mainmast altogether, as it got in the way of shooting the nets. The heyday of the herring drifters in the late C19th and early C20th was dominated by two-masted luggers, most of them dandy-rigged.