By the early nineteenth century, the scientific community was beginning to take notice of the fact that, not only were there separate populations of herring, but that there were distinct differences between them (see Divine Providence). In A History of British Fishes (1836), William Yarrell announced:

The examination of considerable quantities of the various sorts of fish caught at the mouth of the Thames during winter by fishermen engaged in taking Sprats, has enabled me to select what I believe to be a second species of British Herring… It is known that Dr. Leach had often stated that our coast produced a second species of Herring; but I am not aware that any notice of it has ever appeared in print. In order, however, to identify the name of that distinguished naturalist with a fish of which he was probably the first observer, I proposed for it the name of Clupea Leachii.

Dr. Leach’s observations had been made on a visit to the South Coast of England in 1808. Yarrell backed up his case for Leach’s Herring by noting that there are three species of herring said to visit the Baltic. Others, he argued, had noticed distinct differences between the herrings that visited British shores.

Leach had observed a Channel herring. Yarrell’s detailed observations of what he proposed as Clupea Leachii was, in all likelihood, a Thames herring. Throughout the nineteenth century, with the development of the railways and the opening market for both fresh and mildly cured fish, the awareness of herring varieties could only increase and in his History of the Fishes of the British Islands (1878) Jonathan Couch dismisses Yarrell’s Leach’s Herring:

This eminent naturalist does not appear to have been aware of the fact, which has been noticed by numerous observers, that the exact magnitude, minuter proportions of shape, and quality of the flesh in the Common Herring are so very different, even in districts not very distant from each other, that none of them can be regarded as signifying a different species.

At roughly the same time, in The Fishes of Great Britain and Ireland, Francis Day was already referring to herring races, noting amongst other comments, that the Baltic herring was a small and inferior race.

Charles Darwin’s theory of evolution had rapidly influenced social anthropologists, struggling to find an all-encompassing scientific principle that would support their empirically and imperially derived sense of European racial superiority.

He published The Origin of Species by Means of Natural Selection or The Preservation of Favoured Races in the Struggle for Life in 1859, but it was his half-cousin Francis Galton who first encouraged the application of evolutionary theory to the study of human beings (Hereditary Genius: An Inquiry into its Laws and Consequences, 1869).

Darwin’s Origin of Species could be regarded as significant enough in the world of herring science, but the baggage of racial anthropology became inescapable. The differences between herring populations are part of the fish’s great adaptability. Size, vertebral counts, the position of the dorsal fin, fat content and, ultimately, taste are affected by environmental factors of temperature, salinity and population range.

In Scotland, Cossar Ewart and Duncan Matthews were examining this territory. F.A. Smitt was similarly engaged in Sweden. There were many others. It fell, however, to Prof. Dr. Friedrich Heincke*, Director of the Biological Institute of Helgoland, to constructed the grand racial theory of herrings. He published Naturgeschichte des Herings in 1898, but he had already been arguing his case for several years.

Heincke’s theory represented a considerable advance in herring studies, but the talk of ‘measurable characteristics’, of anthropometry and the parallels to the study of man does give pause for thought. However unfair on his monumental work, it is hard not to see the callipers shifting from the length between a herring’s ventral fin and anus to the lips and noses of passers-by.

Nevertheless, there is an heroic quality to Heincke’s detailed and methodical differentiation of herring varieties. He laid out a closely argued list of 65 measurable characteristics, reduced, for practical purposes, to 26: 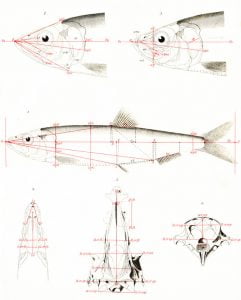 Praising Heincke as the man who first applied anthropometrical measurements to the distinguishing of these (herring) races, in the 1920s the English herring historian James Travis Jenkins notes that French scientists, faced with a similar problem with the classification of the races of man, reduced their initial 102 measurable characteristics to a ready reckoning 20.

Over a twenty year period, Heincke conducted and collated measurements on 5,106 young and adult herrings, 88 larval herrings, 432 sprats and 50 pilchards. They were taken from 99 different European locations, the full 100 achieved, for some reason, through the inclusion of 30 examples of Clupea zunasi, preserved in alcohol and sent from Japan.

Heincke’s closely argued and combative text is followed by 201 pages of tables, recording each individual fish and the batch from which it came. He includes 26 pages of illustrations identifying the heads, crania and full-length variations of his European races:

It was already known that there was considerable variety within the different local populations: different numbers of vertebrae, keel scales, etc.. Heincke’s method was to find the mean of his measured characteristics and then describe and draw, for each variety, a consequent racial ideal.

The Defeat of Facism

Political temperatures by then were rising and the associations of herring racial theory were harder to ignore. In his Buckland Lectures of 1933, William Hodgson was noticeably less of an enthusiast for Heincke’s language and ideas than James Travis Jenkins had been.

Preferring the more accurate biometrical to the suspect anthropometrical, he cautiously accepted some aspects of the theory, while registering a hint of distaste for its baggage. His tone seems, at times, to prefigure the mild-mannered professors of British wartime propaganda, who nevertheless outwit the Gestapo at every turn.

With the confidence that came with Hitler’s defeat, in The Herring and its Fishery (1957) Hodgson begins to sound like Kenneth More, taking the pipe from his mouth and using it to emphasise his points: The Englishman abroad – apart from the fact that he always looks like an Englishman abroad – can always be identified by his passport; but how can one say where a herring comes from?

Look here, old bean, he almost says, you may get away with that kind of thing in the Baltic, but it just won’t wash on these shores:

Variations in the number of skeletal components, such as vertebræ, fin rays, “keel” scales, etc., are supposed to be caused by environment at the time the young larva is developing in the egg, and Professor Heincke, in 1898, showed that by using these variable characters it was possible to divide European herrings into a series of tribes, each with its own spawning place and time; but this tribal theory is now only accepted in a very general way because the intermixing of herrings seems to be an absolute certainty, at any rate in the southern North Sea.

Hodgson questions whether the ‘racial’ variations are true genetical differences or merely the result of environment at the time of formation of the embryo, but even when not dealing with racial theory, his analogies bring him back to the moral task in hand: