On an evolutionary strategy aimed at dealing with predation, which didn’t imagine the purse seine net or the unregulated pursuit of profit

The complete-meal dimensions of the Atlantic herring resulted from an evolutionary adaptation to life in the colder latitudes of the North. The handy individual size combines in shoals of extraordinary dimensions and it is this which determined the huge economic, historical and cultural role the fish has played in the development of Northern Europe.

The scale of the shoals made it hard to catch herring in anything other than ridiculous numbers, which in turn determined the need for effective preservative cures.

Variations in size and fat content between various inshore and oceanic populations – and the need for each producer to create actively interested markets for their output – account for the sheer number, diversity and tastiness of these cures. 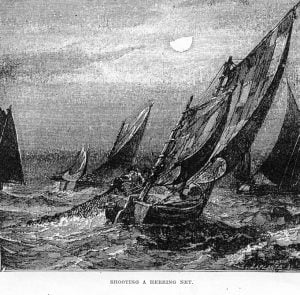 In The Herring: Its Effect on the History of Britain (1918), estimating that, in the calendar year 1913, he personally consumed 161 herrings (being a Norwich man, principally as bloaters), AM Samuel conjured up a vision of plenty, that is genuinely disturbing to anyone concerned by the current state of fish stocks:

In 1881 Professor Huxley stated at Norwich that 2,500,000,000 were taken out of the North Sea and the Atlantic every year, and that over 500,000,000 herrings are contained in one square mile of one of the many shoals which approach not only the coast of Britain, but also those of Scandinavia and the Baltic, and of Eastern North America, every Spring and Autumn. A shoal usually covers half a dozen square miles though it may be very much larger; it is often eight or nine miles in length, three or four miles in breadth, and of unknown depth, the fish being closely packed like sheep in a flock moving along a country lane.

In that year, the combined herring species supplied well over a third of the total world fish yield, the Pacific Ocean sardine contributing up to 55% of this and the Atlantic herring in second place with 25%.

Approaching their feeding or spawning grounds, each herring places itself roughly halfway between the snout and the tail of the fishes to both left and right. In some marine herring species, where spawning occurs in rivers, estuaries and areas of lower salinity, this gathering also allows the fish to adjust biologically to the change.

Recent research has explored communication within the shoal (see Farting).

Bringing such large numbers together on the spawning grounds has been a successful evolutionary strategy with regard to the logistics and productivity of sexual generation. In smaller fish, such shoals can become fatally attractive feeding opportunities to groups of predators, but the Atlantic herring’s size gives it greater speed as well as mass.

Killer whales have a neat trick that involves flicking their tails with sudden force against the water, sending shockwaves against a herring shoal, disorienting and dislodging sufficient individuals to satisfy their needs, but the shoal has worked successfully as a strategy for the Atlantic herring in its dealings with natural predators.

In its evolutionary strategies it did not imagine the development of the net. Or satellite imaging. It particularly did not imagine the purse seine net. Even before the onset of modern technological aids, however, the herring shoals helped fishermen by imparting a celebrated fire in the water, a phosphorescent glow visible on the surface.

The shoals have won the occasional battle. There are several records of fishing boats, capsized and lost beneath the sheer weight of herring catches. As recently as 1920, the Mary Ann, a drifter out of Penzance was lost in this way, only one survivor left to tell the tale.

Sensitive to changes in temperature and salinity, responsive to tidally affected current shifts (particularly at the larval stage) and the movement of the plankton on which they feed, shoals have also frequently disappeared from their familiar grounds, sometimes for several decades. Historically, this has often damaged or even destroyed the livelihoods of communities that came to depend on them.

The pressure of the shoal in a purse seine net means most herrings come aboard Dead On Arrival, but even before its development they were thought to die immediately on being taken from water – the habit perceived as an obstacle to study.

W.G Sebald in The Rings of Saturn (1995) refers to an account of an inspector at the Rouen Fish Market, the appropriately named Noel de Marinière, who discovered a pair of herrings that were still alive and felt immediately impelled, in the restless spirit of scientific inquiry, to test their capacity for further survival by cutting off their fins and by mutilating them in other ways.

In such ways the sum of our herring knowledge has slowly advanced.