He had his flaws, he may not have been the poet herrings so richly deserve, but he was The Herring Poet – let’s celebrate him anyway!

Known as The Herring Poet, John Lockman was Secretary to The Society of the Free British Fishery, established in 1749, which agitated for The Act for the encouragement of the British White Herring Fishery of 1750 and benefited from its extension of bounties and regulations.

His own major contribution to the debate was the pamphlet, The Vast Importance of the Herring Fishery, etc, to These Kingdoms, as respecting the National Wealth, our Naval Strength, and the Highlanders, which went to two editions at this time.

The creation of the company was one of many attempts to create a British herring industry that would be competitive with the Dutch.

The ambitions of The Society were dented by the activities of privateers, particularly French ones, but probably suffered more from its celebrated level of administrative incompetence and corruption (in which Lockman may or may not have played a part).

Three or four years after it was established, LD Nealme, another of the Society’s officers was charging Lockman with taking its herrings without paying for them. He was in the habit of giving away free herrings with copies of his poems, but Lockman was having none of it.

He gave published response in A Proper Answer to a Vile Anonymous Libel written by L.D.N. Chiefly against John Lockman, Secretary to the Society of the Free British Fishery in a letter to Slingsby Bethell, Esq., President of the Said Society, London, 1753.

The Herring Poet launched himself into the task with a vengeance. Where, my little Jesuit, is the Petty Cash-book thou burnedst? he asked. Our Tartuffe knows perfectly well that he was rebuk’d for daring to lay his sacrilegious paws on the Society’s Shetland herrings before they were seen or tasted by the Royal Family, his master or the public, he counter-accused.

N____e dip his brush, in soot, and filth and gall
And draws his devil on a bog-house wall.
Then as my picture, to the world ’tis shown
But the strong likeness proves, that ’tis his own!

The Society eventually collapsed, all its herring busses and effects sold at Southwold in 1772. Hogarth was a friend of Lockman – in Beer Street, the two fish sellers at the centre of the picture are reading one of Lockman’s pamphlets.

Possibly his greatest work, The Shetland Herring and Peruvian Gold-Mine dates from 1751, an encouragement to the Prince of Wales in his patronage of the Society’s ambitions. 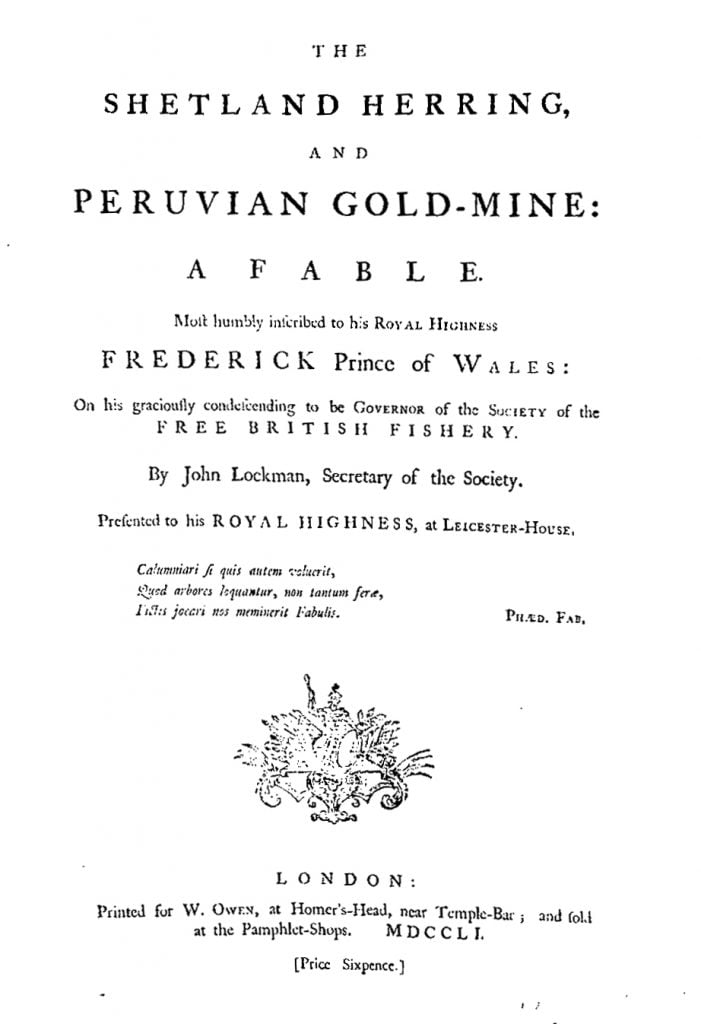 PAINTING and Poetry are Twins
(In Terms like these some Bard begins.)
Their gen’ral Principles the same,
Both Sparks of an aetherial Flame,
Yet oft, in Practice, They’re contrary
And wide, as Jew and Christian, vary:
For Things which, told in Verse, delight,
When painted shall offend the Sight.
Doubt you? Two subjects here peruse
(Contrasted by a moral Muse)
Which cou’d not in one Picture stand,
Tho’ colour’d by a Titian‘s Hand.

Begin. A GOLD-MINE of Peru,
A SHETLAND HERRING chanc’d to view.
“View? (says a Critic) Had it Eyes?”
Read Aesop, the Objection flies.

This MINE our Herring thus addrest:
“Vile Fish! which the Polite detest;
Refuse of Billingsgate profane,
Where Scoffs, and Oaths, and Tumult reign!
Thou Beggar’s Cate, which Mopsa cries,
As daggled to her Stall she hies!
Thou, specious Lump of taudry Skin
With a rude Heap of Bones within!
Dar’st thou with mighty ME compare,
Whose Bounty Kings are proud to share?
Who round the Globe triumphant run,
And dart like Splendors with the Sun!”

“Vain-glorious MINE! (the HERRING cries)
‘Gainst Me why thus, insulting, rise?
Thou, who in Earth’s dark Womb conceal’d
Art Man’s Destruction when reveal’d!
Thou, Luxury‘s perpetual Source,
Polluting all things in its Course!
Thou, shackling Spaniards, tho’ their Slave,
A People once so wise and brave!
Thou, who canst break sweet Friendship’s Tye,
Bid Low Defects with Merit vye
And swell’d by more than savage Pride,
Wilt Father, Brother, Son, divide!
Things sacred, with profane, confound!
Religion, Truth and Honour wound!
Wide thro’ the World spread Ruin‘s Flame,
And Mammon, ‘stead of God, proclaim!

“Whilst I, calm Tenant of the Deep,
Wake BRITONS from their dangerous Sleep,
Urge Them, Sloth‘s shameful Chains to break,
And swift to Industry awake;
(Brave INDUSTRY! * a Nation’s Health,
Parent of Virtue, Power and Wealth.)
Bid Them, Her thousand Hands employ,
And lasting Blessings thence enjoy;
Bid range the Arts in fair Array;
Bid useful ARTS their Powers display;
‘Till Love of Them all Orders fire;
‘Till ALL to one vast WORK conspire,
The FISHERY! Third EDWARD’S ** Boast,
A WORK, His God-like Mind engross’d,
When crush’d the Gauls. in Crecy’s Field,
He vow’d Their FLAG to His should yield;
Should, in our Seas, His Empire own,
Thus give new Radiance to His Throne.

By EDWARD rous’d, round half the Isle,
New Fisheries began to smile:
From These our HERO mann’d a Fleet
(His Plan, till then, was incomplete.)
The FLEET, the Terror of the Sea,
Made Albion‘s KING – What He should be.’

* ‘Tis hop’d this Remark will be happily exemplified in the Treaty now on Foot, between the Society of the Free-British Fishery, and the Governors of the Foundling Hospital, in order for employing the Children of it in making Fishing-Nets; and afterwards in Fishing on board our Busses, etc.

** The Herring Fishery ow’d its chief Encouragement to this renown’d Monarch.