An attempted exploration of exactly what this is, despite disagreement among its advocates and loose definition amongst suppliers

Essentially a Yiddish term for salt herring, there’s variety in the explanations of Jewish aficionados as to its nature and point of origin.

Schmaltz is rendered chicken or goose fat and some descriptions say, plausibly, that schmaltz simply refers to the fact that fat herring is used – full herring, caught before spawning, the flesh full of oily richness.

There are some who suggest it refers to salted herrings, packed for enhanced preservation in chicken or goose fat. Although it is often sold in oil, like lot of Eastern European herring, there seems little evidence of chicken or goose fat use as a current practice.

Some argue this would not be kosher, anyway, as both the Talmud and Rabbi Jacob ben Asher’s C13th/14th Yoreh De’ah argue that eating fish and meat together might cause skin problems or damage to the hair (tzaraath).

But does this only concern the cooking of meat or fish together? Packing isn’t cooking. Either way, the Ashkenazi Jews of the Baltic seem to have tended towards flexibility in the matter of fish.

Claudia Roden in The Book of Jewish Food (1996) steers clear of the arguments, saying no more than that schmaltz herring is cured by being covered with coarse salt and left with a weight on top for up to 4 days.

The Jews of the Baltic were barred by the German Hanse (the Hanseatic League) from active involvement in fishing – and probably in the international herring trade which the Hanse monopolised for a while. They became active herring curers, however, and, trading their cures they spread the taste for the fish to all the communities they subsequently established in the diaspora.

Schmaltz herring is sold as whole fish, in fillets, both unsmoked and smoked (where, from the illustrations, it looks quite like golden herring). The logo for Raskin’s Traditional Schmaltz Herring has a beautiful echo of Watson & Co’s (later John West’s) iconic image for their Skipper brand, but with a bearded shopkeeper rather than a herring drifter captain. 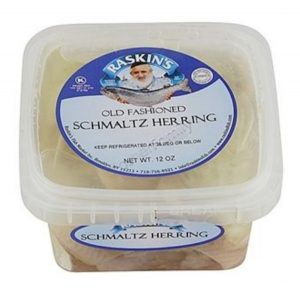